This morning Aubrey firmly announced she wanted to make an art project. It has been quite some time since we have done an art project. With vacations & most recently sick kids I haven’t had the time or energy to organize one, but since she asked it was a must.

I asked her what she wanted to do and she said “paint a bug.” So I popped over to No Time For Flashcards for some inspiration and we settled on painting a pretty ladybug. Here is how you can make your very own.

2. Let your child paint the paper plate. I gave her a paintbrush, but she wanted to use her hands, whatever works!

3. While your child is painting cut the circles and other shapes out of black construction paper.

4. Glue the parts to the paper plate and add the antennas.

5. Enjoy a ladybug snack while it drys (see below).

During our art project little miss asked for a snack so I decided we would tie everything together by having a “ladybug” apple for our snack. Here is how we made ours.

1. Gather supplies. We used a red apple (ours weren’t a true red, but it was what we had), pretzel sticks, chocolate chips and peanut butter.

2. Slice the apple in half.

3. Poke the pretzel sticks in the top for antennas.

4. Dip the chocolate chips in the peanut butter and place on apple.

To wrap everything up we sang this little song and read The Grouchy Ladybug by Eric Carle.

*Substitute the names of your children for those in the rhyme 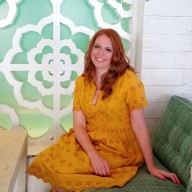